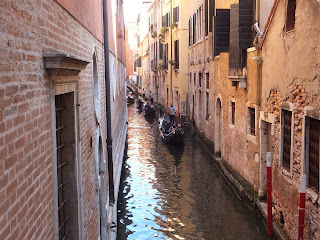 My blog posts for the past two and a half weeks were written three weeks ago and scheduled to post every few days. I wasn't home to blog!

Joe and I left Philadelphia on Sunday, July 21, our 46th anniversary, and landed the next morning -- guess where!!!

Venice is a charming city. Everywhere there is water, and there are millions of narrow alleys and small footbridges over waterways. There are no cars; we took a water-bus from the airport to the hotel and a boat-cab later when we were ready to move on. No, we didn't choose to take a gondola ride with a serenade; there was enough romance just being in Venice.

There are police boats, ambulance boats, commercial delivery boats and although we didn't see one, hearse boats.

The restaurants at St. Mark's were expensive, perhaps justifiably so. This square is amazing in its scope. There are outdoor cafes in abundance, some with live music. One day we lingered over iced tea while we listened to a quartet and watched the people. And the pigeons. We found that the restaurants further away from the square were more reasonably priced and the food was ever so good. 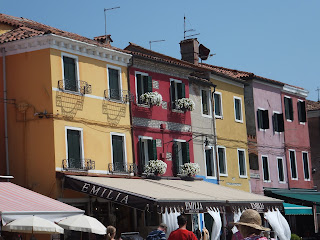 On our second day, we took a water bus to visit two islands: Murano is famous for glass; Burano for lace and colorful buildings. We weren't overly impressed with either island. The weather was hot and the streets were so crowded.

In Murano, though, I bought a clear glass necklace that was different from the colorful beads we saw everywhere.

The "bus" to Burano was crowded and we stood for a long ride. Burano was as pretty as we'd been led to believe, but again the crowds and the heat were mighty. The lace we had heard so much about was mostly imported from China (and I didn't have to look all that closely to determine that) although there was some local-made lace that was lovely and very, very expensive. We had lunch (superb calamari!) at an outdoor cafe where we interacted with a non-English-speaking family who were taking photographs of each other, ending up with reciprocal group portrait services. I liked noticing that laughter is laughter, irrespective of language. 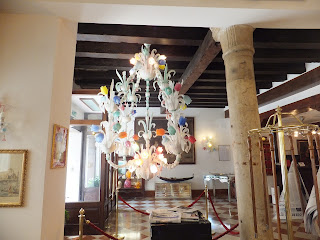 Hotel Giorgione is a relatively short walk from the Rialto, where the crowds were impressive. It isn't in the thick of things down by St. Mark's, though we spent plenty of time there. Rather, it was in a sort of neighborhood, not as crowded as other parts of Venice. We were there for three days and during that time learned our way around, found our local church, our local cafe, our local gelato shop (we became faithful patrons of this particular establishment), the newsstand, and the good restaurants. We were there long enough that we came to recognize some of our local dogs!

Our hotel room was on the ground floor and opened directly to the small pool/jacuzzi which was adjacent to the breakfast area and bar. The room was larger than we had anticipated and beautifully appointed. The lobby had several seating areas with Murano glass everywhere. The breakfast was more than adequate and the desk staff friendly and helpful.

My next post will just be some additional photos and impressions from Venice. All too soon, it was time to move on!

Mrs. Goodneedle said…
I'm living vicariously... what a wonderful adventure you've had! Welcome home, Nancy,and happy (belated) anniversary! I can't wait to see what "we" do, and where "we" go next. Thanks for taking us along!
Friday, August 09, 2013 8:27:00 AM

Barbara Anne said…
Oh! What a glorious experience and perfect celebration of your 46th wedding anniversary! Love the photos and your interesting narrative and I look forward to the next instalment (one 'l' looks wrong!).

Gretchen said…
WOW! What a wonderful vacation!! I can't wait for your next post. I bet you had wonderful experiences. You are a woman after my own heart--finding your favorite local gelato shop and finding and enjoying a local neighborhood :)
Friday, August 09, 2013 1:28:00 PM

Janet O. said…
What a wonderful adventure. DD#1 spent some time here and I loved seeing it through her eyes. Now I get to see it through yours! Who ever thought I would see Venice twice?!?
Friday, August 09, 2013 11:05:00 PM

Anonymous said…
Not only are there no cars there are no bikes, etc. unless you are under five, then you can use a skooter. I was struck by the directions given to this place or that - how many bridges to cross.
Monday, August 12, 2013 8:08:00 AM

OT Quilter said…
I've been having trouble keeping up since the demise of Google Reader, so it was a wonderful surprise to discover your travel posts. And Venice! I haven't been (yet!) but the city has become familiar through the Inspector Brunetti novels by Donna Leon. The audio versions read by David Colacci will transport you right back to Venice!
Tuesday, August 13, 2013 11:14:00 PM